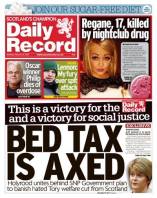 Announcing the Scottish Government’s Revenue Scotland and Tax Powers Bill in December 2013, Cabinet Secretary for Finance, Employment and Sustainable Growth, John Swinney MSP said ‘This Government will take a distinctly Scottish approach to taxation, including a vigorous approach to combatting tax avoidance’. Swinney added ‘We firmly believe that decisions about Scotland’s taxes should be taken by the people of Scotland. The Bill and the establishment of Revenue Scotland are important steps in taking greater responsibility for setting and collecting taxes in Scotland’.

Though the details of tax management policy seldom lead the political debate, this is a clear instance of pro-independence politics bumping up against the limits – and opportunities – of devolution. Under the new bill, the non-ministerial body Revenue Scotland will become the tax authority responsible for management and collection of the Land and Buildings Transaction Tax (LBTT) and the Scottish Landfill Tax (SLfT), both of which are due to be devolved from April 2015 as per the Scotland Act (2012).

What does this tell us? Whatever the referendum outcome, the Scottish Government intends that Scottish Ministers will lead on devolved tax policy development and future legislation. The newly established Revenue Scotland will be given the lead on measures to tackle tax fraud/tax evasion through Targeted Anti-Avoidance Rules (TAARs) or through application of the General Anti-Avoidance Rule. Scottish Ministers see clamping down on tax avoidance as a key priority, the politics of which are central to financial arguments for independence. Requiring Revenue Scotland to publish an annual report, and to submit it for Ministerial as well as full parliamentary scrutiny, will strengthen the sense of Scottish fiscal accountability and democratic oversight.

Devolved tax collection can also be closely aligned with other areas of Scottish Government policy, becoming an important lever of ‘joined-up government’. The UK Government introduced Landfill Tax in 1996, attempting to ensure that landfill waste was properly priced and to discourage the disposal of waste to landfill. The new Scottish Landfill Tax includes provisions allowing the Scottish Government to alter the rates and exemptions inherited from the UK tax (via subordinate legislation). This power would allow the Scottish Government to alter the tax collection system in pursuit of policies such as its current Zero Waste Strategy.

A similar shift is in store for the Land and Buildings Transaction Tax. The Bill sets out a ‘progressive’ system of taxation, as opposed to the ‘slab’ structure of the UK Stamp Duty, set up in 2003. According to John Swinney, this ‘slab’ system ‘caused market distortions and leads to the false recording of house prices in an effort to avoid paying tax at the higher rate’.  Swinney’s assertion was supported across the chamber, including Scottish Conservative Gavin Brown MSP, a Finance Committee Member.

The Tax Powers Bill marks a critical juncture in the ability of the Scottish Government to prove that it can successfully set up a distinctly Scottish tax regime, and (over time) the opportunity to display how taxation would work in an independent Scotland. Revenue Scotland, as the authority responsible for the collection of the devolved taxes, could establish itself as tough in tackling tax avoidance and efficient by running with as few staff as possible, and on a small budget. That, of course, has implications for the independence debate.

One only has to look towards the Scottish Government’s Independence White Paper to understand the link between how successfully the Scottish Government plans for the new tax powers, and how that plays into the SNP’s overall vision of how taxation would work in an independent Scotland. Ultimately, the goal would be to use independence as an opportunity to design a tax system ‘based on a clear set of principles and to better link to complementary areas of policy such as welfare’.  What this indicates is an ideological belief in a redistributive tax system, which the Scottish Government believes to be fairer. There are a number of options open in order to achieve a more redistributive tax system, and Revenue Scotland would provide the foundation for the collection of a much wider range of taxes under independence, but also through further devolution.

This underscores the importance of tax devolution within the context of Scotland’s constitutional debate. If the Scottish Government can oversee a smooth transition process and successfully convey the benefits of the devolved taxes to businesses and individuals, then business people in particular may decide that the Scottish Government could be trusted in designing a completely independent and robust tax system. Furthermore, if Revenue Scotland can function on a low budget with successful outcomes, this will establish the organisation as a legitimate and capable tax authority which could successfully take on the management of a wider range of taxes either through the devolution of further taxes from Westminster, or through independence.

Paul Gillen is a PhD candidate at the University of Stirling.  His thesis analyses how the Yes and No camps promote and subvert national identity during the Scottish independence referendum campaign. Paul’s other research interests include the extreme right in Britain and Europe, British counter-terrorism policy, IR theory, and environmental justice. Paul is an avid Chelsea fan, and attempts to attend a game once a season.