Five years is only a quarter-note of historical time, but so much has transpired since 2014 – enough to leave both Scottish and British politics un-recognisable – indyref now sounds like an entirely different song. Or does it?

In planning this retrospective on the cultural debate on independence (held at City of Edinburgh Methodist Church, 21 September), I anticipated a mood of warm reminiscence, and perhaps some gentle pruning of the hopeful visions of young creatives. But we found little appetite for the pleasures of evocation and reconstruction. Instead, there was a general air of disenchantment, as a number of former Yes activists dismantled their passions of five summers ago, while others sought to pluck the democratic baby from the bathwater of disillusion.

We began with a panel on ‘Writers and Independence, Five Years On’, exploring the role of writers and artists in 2014 chaired by Liam Murray Bell. Poet, performer and spoken-word producer Jenny Lindsay recounted her own bittersweet experience with National Collective, the youthful grassroots ‘cultural movement for Scottish independence’, deftly explored in her 2015 collection Ire and Salt. For Lindsay, the ‘co-opting’ of NC by the central Yes campaign as the vote drew near – a sense of being ‘used’ in ways that infringed her own personal and artistic independence – cast a shadow on the summer of hope and belief. The creative energies stirred by 2014, she observed, went directly into party politics – via the explosion of the ‘YeSNP’ in 2014-15 – and left a meagre legacy in creative expression and progressive activism. For this reason, she doubted whether writers and artists would be prominent voices in any indyref2.

Janice Galloway was highly circumspect in her memories of 2014, and recommended the stance of the detached observer, noticing how others react (and remember) rather than dwelling on her own opinions. While distrusting the stance of the artist-seer, and more curious about the views of younger artists, Galloway did venture a memory of ‘middle-class folk keen to embrace a “movement”’ in 2014, but refrained from judgement, preferring to listen as precisely as possible – holding to the disciplines of novelistic observation. Harry Josephine Giles cast a cold passionate eye on the Yes movement and its legacy, including recent divisions within the ruling SNP on trans rights, in light of which Giles viewed today’s pro-independence movement (including its reactionary outriders) as ‘hostile and dangerous’. In 2013 Giles had made a strategic compromise with Scottish nationalism because they believed in the Yes movement’s potential to be ‘a force of transformation and imagination’, offering radical possibility alongside constitutional rupture. Giles now regrets lending their energy to a project whose main consequence has been the strengthening of ‘rump populist nationalism’. Their main impression of 2014 was feeling ‘captured by the politics of the state’, in ways an earlier generation of radical Scottish writers (e.g. Tom Leonard) predicted and cautioned against. In response, Giles has redoubled their commitment to anarchist and anti-fascist activism, and will have nothing to do with any indyref2.

Mike Small, editor of the blog Bella Caledonia, agreed that the imagination and energy of 2014 ‘has gone stale or has simply gone’. The progressive Yes coalition is today divided between a self-absorbed ‘nationalist movement’ (mainly online, talking to itself) and a more diffuse ‘democracy movement’ with little appetite for flag-waving. The latter group is profoundly disillusioned; not only by Scottish developments, but also Brexit, austerity, the impunity of successive Tory governments, and collapsing constitutional and democratic norms. (The day I published this write-up, the UK Supreme Court ruled that parliament had been unlawfully pro-rogued by Boris Johnson.) But unlike the nationalist movement, Small argued, the democracy movement can be salvaged, rallied and re-focused around distinct progressive goals. A Scottish Republic should now be the focus and rallying slogan: ‘we thought we wanted a parliament but we need a democracy’. In this regard, the image of 2014 had been sharpened and clarified by the passing of five years, not faded or blurred. The resulting picture was not entirely bleak.

Our second panel considered ‘Indyref in Personal and Public Memory’, beginning with the recollections of two members of the BBC’s indyref youth project Generation 2014 (Amina Davidson and Sabina Jedrzejczyk), who were school pupils turning 16 not long before the 2014 vote. Now deep into advanced study in music and software engineering, respectively, Davidson and Jedrzejczyk recalled experiencing indyref like extra school homework, swotting up on facts and figures in advance of media appearances, treating the debate more diligently than most adult voters. They also recalled the novelty of an ‘inside view’ on the media’s indyref – the studied neutrality and both-sides-ism of BBC formats, occasionally hearing breaking news before the public, and the challenge of explaining complex issues to Scottish, UK and international audiences. Despite the strains of ‘growing up in public’ in this way – forming and developing their teenage political views in front of cameras and microphones – both Davidson and Jedrzejczyk strongly endorsed the extended franchise of 2014 (which granted the vote to 16 and 17-year olds) for any future indyref. 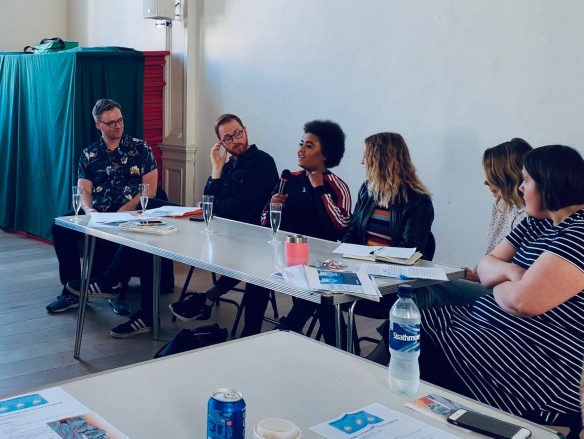 Rory Scothorne and Alice Doyle are PhD researchers examining the past and future of indyref, respectively. Scothorne noted that the future-oriented dreaming of 2014 had the unfortunate effect of cutting the Yes movement off from its own cultural and political precursors in the 1960s-70s – links he is now studying in his work on postwar Scottish radicalism and its print-cultures. Having been an active Yes campaigner and National Collectivist, Scothorne now confessed a degree of embarrassment at the sense of novelty and fresh beginnings circa 2013, while an earlier tradition of critical, unsettling national radicalism went unheeded.

Working in collaboration with the National Library of Scotland, Doyle is exploring how indyref was archived and collected (including digitally) for reconstruction by future historians. She recalled her own sense of dis-involvement from the intensity of constitutional politics when returning to Scotland in the summer of 2014, but quickly feeling taken up (and taken over) by indyref fever. The intense emotional dimension of this experience, Doyle observed – the one most likely to lodge in our memories and stories of self – was that least likely to be captured in the archive. Thus the records and traces of indyref will be preserved quite separately from their affective power, and it seems likely that only those with first-hand experience will find artefacts and documents evocative of the social and political ‘atmospheres’ of 2014. 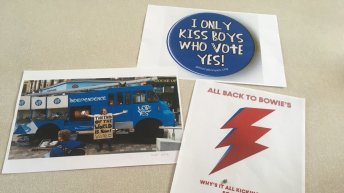 Many different and antithetical responses to indyref artefacts are of course possible, and we finished this session with a few prompts and objects from the Scottish Political Archive, run by Sarah Bromage at the University of Stirling. Working with images, badges and campaign leaflets of 2014, we split into groups to discuss our strongest memories of indyref and how our personal recollections might enter (or escape) public history. One audience member made the telling remark that as a Scottish Tory, her decision to vote Yes relied on precisely the discontinuity Scothorne had highlighted as a problem: for this voter, it was vital that the 2014 prospectus for independence not evoke the nationalism of the 1970s. A useful reminder that historical consciousness can carry political risks.

The final session, chaired by the poet, spoken-word producer and researcher Katie Ailes, explored ‘Indyref, Nature and Place’. Alec Finlay began by responding to the negativity of the opening panel, and challenged the sense of ‘personal anguish’ voiced by younger artists whose experience seemed to reflect the performative intensities of social-media campaigning. Finlay lamented the erosion of shareable ‘civic’ space necessary to genuine dialogue and debate, and argued that artists had a duty to open and preserve such space. The alternative was to ossify into cliques of tiresome and embittered ideologues, as had been the case with previous generations of disappointed nationalist poets. Moving into the panel theme, Finlay distinguished between ‘the right to own land versus the right to care for land’, and highlighted rights of access and community ownership as advances secured by the Scottish Parliament, small steps in a progressive direction worth defending and building upon. 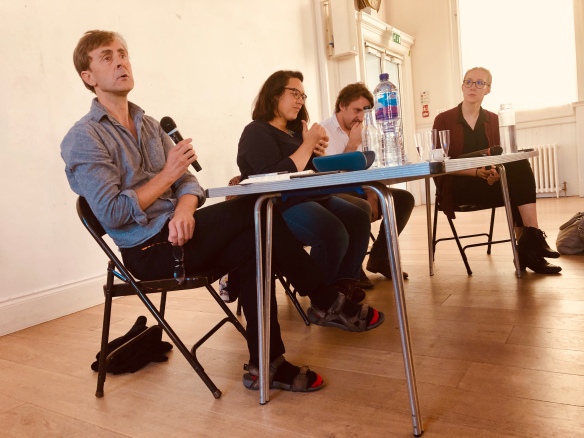 Poet Pàdraig MacAoidh agreed with earlier speakers that the more radical discussions of 2014 had gone by the wayside, and urged a return to fundamental questions in relations to environment, ownership and survival. (As several participants commented throughout the day, the urgency of climate change makes Scottish independence seem a smaller issue than it appeared even five years ago.) In noting the very different indyrefs he observed in cities, towns and island settings in 2013-14, MacAoidh was struck by the ‘visual silence’ of the No campaign – not the presence but the absence of No signs, badges, stickers, etc, even in areas expected to vote No by a significant margin. He ‘was wary of what could fill that silence’, and remains so. One unwelcome source of noise was the ‘re-politicisation’ of Gaelic after 2014, with endless spurious debate about road signs as nationalist propaganda. As a Gaelic speaker, MacAoidh now ‘feels less comfortable in his own country’ and finds the need to combat ignorant attacks on Gaelic (motivated by constitutional animus against independence) both exhausting and discouraging.

Writer and performer Hannah Lavery discussed her own ambivalence as a Yes-voter of colour who is acutely wary of ‘Scottish exceptionalism’, and for whom British identity ‘included me and included my colonial history’. She rejected the ‘bullshit’ arguments of nationalists claiming Scotland is or was ‘colonised’, and connected wilful ignorance of Scotland’s relationship with slavery and imperial plunder to more familiar (and comfortably debunked) illusions romanticising Highland landscape. The cultural wing of the Yes movement seemed keen to address the latter, but not the former. In respect of national place and ideas of belonging, Lavery queried ‘the Scotland beyond Scotland’: what of our responsibility to the lands and places Scotland ‘stretched to’, via empire? Why are national ‘homecoming’ campaigns directed at Canada and Australia, but not Jamaica? It was acutely and painfully clear that the ‘Scotland’ of the referendum question ‘is not a fixed thing’ – its horizons, and its historical awareness, must reach beyond what is taken for granted.

A different choice of speakers would have yielded a different event, of course, but this gathering left three clear impressions: a mood of cynicism toward the political vision and creative output of the Yes movement circa 2013-14; second, a tendency to judge 2014 by its apparent consequences in the fraught world of 2019; and third (in tension with the previous point) a sense that indyref 2014 is not in fact ‘over’ at all, and thus its meaning and impact are still to be determined. This final impression is the strongest and most complex. Indyref cannot be retrieved from the shallows of memory, wistfully or otherwise, because for many the experience has yet to be fully digested, and has none of the inert, objective quality of the narratable past. For many Yes voters – the clear majority of this gathering of 40 – it remains present, charged, un-grievable and somewhat ungraspable. This profoundly unfinished business explains the rawness and tension of our discussions in Edinburgh, which felt at times closer to a large counselling session than opening the scrapbook of recollection.

Alice Doyle and Harry Josephine Giles are doctoral researchers at the University of Stirling, where Maike Dinger will shortly begin a PhD on the role of writers in indyref 2014 (in collaboration with the University of Strathclyde). All three are students funded by the AHRC, via the Scottish Graduate School of Arts and Humanities. The organiser thanks the Faculty of Arts and Humanities for its support of this event, and course all the speakers and attendees.

1 thought on “Indyref: Culture and Politics Five Years On (Summary)”