The Scottish Studies Research Group at Stirling has settled into a regular fortnightly routine, and the standard of presentations thus far is inspiringly high. At our last meeting on 1 June, Dr Barbara Leonardi presented a compelling paper based on an article that will see publication later this month in Studies in Scottish Literature, entitled ‘James Hogg’s The Brownie of Bodsbeck: An Unconventional National Tale’. On a personal level, having known her for about five years, it was nice to finally see Dr Leonardi present her work!

Barbara is an Early Career Researcher working on the Stirling/South Carolina Research Edition of the Collected Works of James Hogg, and her presentation argued that Hogg’s thematic choices in the short novel The Brownie of Bodsbeck work to subvert the traditional national tale. As Barbara explained, the conventional national tale follows Edmund Burke’s conception that the bourgeois family should form a neat and instructive representation of the nation, and in this case, the British Empire. In this conception, peasants and women are figured as the infants of Burke’s family-nation. Walter Scott notably employs this marriage plot in Waverley, as an ideological reconciliation of Scotland and England. In Barbara’s reading, Hogg challenges this paradigm through numerous subversive choices of theme, event and character. Brotherhood becomes a central trope in place of romantic love, with Katharine’s Lowland father forming a bond with a Highland soldier. At the same time, Katharine herself doesn’t engage in marriage with the potential ‘hero’ of the novel, and takes no lover, further disrupting the key symbolic relationship of the national tale. Katharine is the agent and moral locus of the text, helping the Covenanters and thus transgressing an unjust law in defence of human rights. 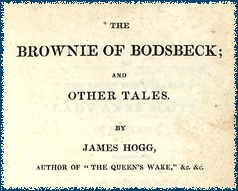 Barbara went on to discuss the dialogue of the text, analysing the apparent dichotomy between Catherine’s faultless English and her peasant background, and the broad Scots of her father. While some reviewers were uncomfortable with this clash of voices, in Barbara’s reading this amounts to a Bakhtinian approach to ‘multivocality’ through which Hogg rejects the centre/periphery division of the imperial ethos and suggests a new, inclusive Britishness based on the validity of working class, rather than bourgeois, ethical values. In this way, Katherine becomes ‘a meritorious symbol for the Scottish nation’, and further exemplifies the way Hogg was thinking ahead of his times. Barbara’s compelling paper will be accessible online after its publication later this month

Typically for these Scottish Studies Research Group meetings, the presentation provoked a lively informal discussion of Hogg, the national tale, covenanting history, publishing and editorial factors in relation to Hogg’s work, and the emasculation of an Episcopalian priest (this latter point occurs in the text)! These discussions have become a real high point of the group’s meetings, often ranging across disciplines (this week literature, publishing, history…) and giving a real sense of interconnectivity between researchers. If you’re working in the field of Scottish studies, no matter the stage of your research, at Stirling or elsewhere, please do come along to the next meeting or get in touch via email; discussions are informal, welcoming, and usually inspiring. The date of the next meeting is to be confirmed, but will be publicised via the Twitter account of the Centre for Scottish Studies (@stirscotstudies). We hope to see you there.

Last Wednesday the Scottish Studies Research Group met for a fascinating presentation by PhD candidate John Ritchie on ‘Sir Harry Lauder and Will Fyffe: Being Scottish in Early Sound Cinema’. John’s talk was based on his wider research, which focuses on  how Scottishness is represented in films produced during the Transition to Sound period, from 1927 to 1933. 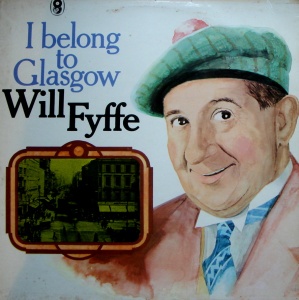 John started by introducing the twin figures of Sir Henry “Harry” Lauder (1870 –1950) and Will Fyffe (1885 –1947). Both were music hall artists that became international stars in the first decades of the twentieth century, as suggested by how American tribute acts to the former preceded his arrival in the United States. John gave examples of how  Lauder and Fyffe were encouraged to record their music hall acts and stage routines for early sound films.

John then explored the performance of Scottishness as central to Lauder’s and Fyffe’s theatre practice. Although Lauder’s personification of Scottishness was more convincing, Fyffe’s too made a point of being identifiable as Scottish. In particular, costume and accent were used to signify Scottishness in music hall and sound film alike. Against a backdrop in which tartan costume became the signifier for nationality,the kilt was the most important element of the mise en scène. As for language, while Lauder’s voice came to represent Scottish language abroad, Fyffe too strove to realise Scottishness through language, but drawing on the east coast vernacular. The ways in which Lauder’s and Fyffe’s personification of Scottishness played to stereotype explains how the former could easily become a target of criticism for Hugh MacDiarmid, who resented  how Lauder’s (hugely popular) performances provided an inaccurate, simplistic and derogatory representation of Scotland. 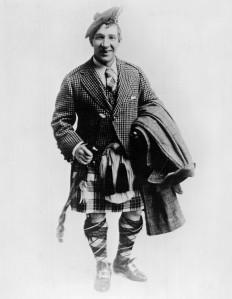 A very interesting interdisciplinary discussion was sparked by John’s presentation, in which we were able to discuss parallels between film critics’ take on Lauder, still influenced by MacDiarmid’s loathing of his performances, and literary critics’ approach to the Kailyard school of Scottish fiction, similarly informed by MacDiarmid’s caustic rejection. We also enjoyed learning more from John about the transition to sound film in Scotland and the state of archival resources around the topic, while hearing some fascinating anecdotes about his research journey and findings.
Our next meeting will take place on Wednesday the 1st of June, at 5pm, Room A7, Pathfoot Building. We will hear from Dr Barbara Leonardi, a post-doctoral researcher here at Stirling, about ‘James Hogg’s The Brownie of Bodsbeck; An Unconventional National Tale’. All members of the Stirling research community, as well as Scottish studies enthusiasts from beyond, are very welcome to attend.