When John Campbell, a Scottish emigrant to Boston, established the Boston News-Letter in 1704 he became the proprietor of what is widely regarded as the first continuously published American newspaper.[1] Lesser known is that his newspaper would print the first runaway slave advertisement as early as 10 December 1705.[2] These advertisements for fugitive slaves – used by slaveholders to recapture those that they regarded as their human property – became an increasingly common feature of eighteenth and particularly nineteenth-century American newspapers.

Campbell left Glasgow in the late seventeenth century, likely between 1684 and 1695, lured by the prosperity of Boston and the number of Scots already settled there.[3] Assuming the role of postmaster of Boston, Campbell found himself at the centre of a key communication network. Privy to information and printed material brought into Boston by ship-masters and merchants, Campbell’s correspondence with influential individuals such as Governor Fitz-John Winthrop of Connecticut afforded him access to scandals, rumours, and hearsay. This privileged position furnished Campbell with all the information needed to compose his own handwritten newsletter. In time, the newsletter would be printed and circulated, marking a key moment in the development of American print culture.

From the first edition of the newspaper, Campbell welcomed advertisements. On the reverse of the first page, it was stated that “all Persons who have any Houfes, Lands, Tenements, Farmes, Ship Vessels, Goods, Wares or Merchadizes, &c. to be Sold, or Lett; or Servants Runaway; or Goods Stoll or Lost, may have the same inserted at a Reasonable Rate; from Twelve Pence to Five Shillings and not to exceed.”[4] Such advertisements, however, were printed only rarely under Campbell’s editorship. Instead, the Boston News-Letter typically regurgitated information from European newspapers such as the London, Edinburgh, and Belfast Gazettes, as well as information gathered from traders and sailors passing through the colonies’ foremost seaport. In time, the decision not to feature regular advertisements would contribute to Campbell’s financial losses.[5] Early newspaper proprietors were reliant on subscribers and advertisements to subsidise the production cost of their newspapers. The use of the hand press ensured printing was a slow process while further commercial difficulties stemmed from lack of paper, expensive ink, and poor distribution networks in a predominantly rural society. One New Jersey newspaper editor would exclaim in 1802 that “Subsisting by a country newspaper is generally little better than starving.”[6]

It was in this context that runaway slave advertisements would become an increasingly common feature of the eighteenth and nineteenth-century American newspaper. Initially brief and composed of a few sentences of text in a dedicated advertisement section, reserved for the pressing issues of the day such as incoming vessels or escaped cows, the runaway slave advertisement would develop into a distinct genre of newspaper advertising. Printed on behalf of slave masters, overseers, or estate administrators, their intention was to facilitate the recapture of the absconded slave through detailed description of the fugitive and their act of escape. In time, advertisers would combine text and imagery in the form of woodcuts. The circulation of this information was purposefully standardised to facilitate oral transmission and was similar to the “Wanted: Dead or Alive” posters of Old West legend. Few people subscribed to a newspaper. Instead, they were read and discussed in bars, taverns, and local shops, entering an informal circuit of public communication and gossip. (The mass production of newspapers did not occur until the 1830s and the establishment of the penny press.) 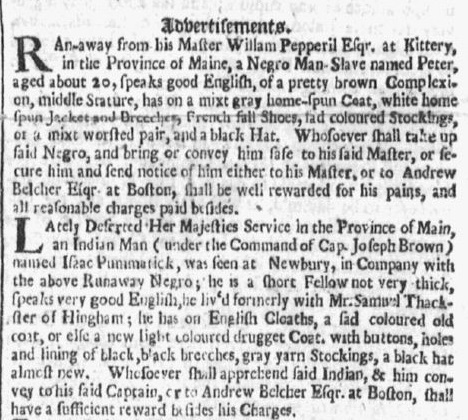 A little over a year and a half after the first version of the Boston News-Letter was published on 24 April 1704, Campbell would print what appears to be the earliest slave runaway advertisement to feature in an American newspaper. The notice for a “Negro Man Slave” depicted Peter, a slave who had run from his master, William Pepperil, in Kittery in the province of Maine. Peter was aged “about 20”, “of a pretty brown complexion” and of “middle stature” and able to speak “good English.” No specific reward for recapture is stated, nor is any particular motive for escape. Information from the advertisement below Peter’s states he was not alone. Peter had been “seen in Newbury,” accompanied by an “Indian Man” named Isaac Pummatick, a deserter from Her Majesty’s service in the province of Maine, under the command of Captain Joseph Brown.[7] These men had escaped together with the outcome unknown, at least for several months. Eight lines of cluttered text in the 22 April 1706 edition of the News-Letter would reveal their fate:

‘In December last, There was Advertisements of a Negro man Slave, and an Indian’s Running away from Mr. William Pepperil of Kittery in the Province of Main, desiring they might be apprehended where every they came, and by virtue of said Advertisements coming (in the News Letter) to South-Carolina, whither the said Negro and Indian had travelled, the Governour of said place has secured the said Runaways for the Owner.’[8]

Carried most probably by vessel from Maine to South Carolina, likely attempting to reach Florida, our knowledge of this brave attempt to reach freedom is only ascertainable from the runaway slave advertisement.

Considering that this is amongst the earliest, if not the earliest, example of such an advertisement, it has attracted surprisingly little scholarly discussion, with the exception of a very brief comment by Professor Ian K. Steele.[9] It was one of the hundreds published in newspapers annually to preserve an American system of human exploitation through perpetual enslavement. While the advertisements commonly amount to but a few sentences, they are rich sources full of insight into slavery and early American print-culture.

[1] Publick Occurrences Both Forreign and Domestick was the title of the first multi-page newspaper and was published in 1690 by Benjamin Harris. The newspaper was supposed to be published monthly however only a single edition was ever printed.

Shaun’s research is funded by the ESRC. Edited by Victoria Hodgson.